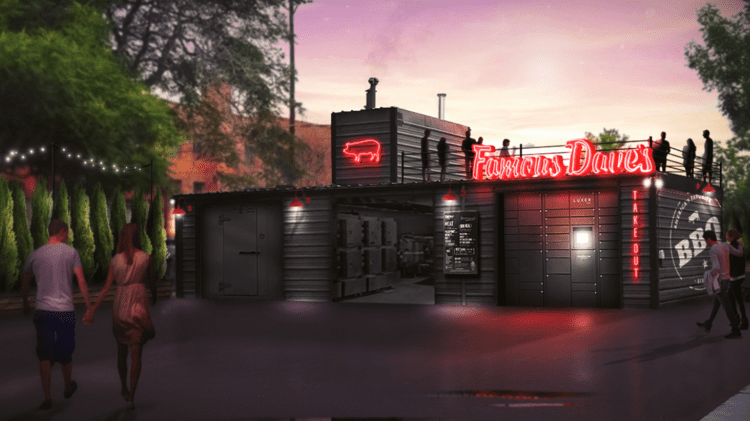 As we kick off the new decade, businesses in every sector are striving to modernize and differentiate themselves from the competition. Famous Dave’s is at the forefront of this movement, with a variety of innovative improvements planned for the award-winning franchise during 2020. Modern Restaurant Management magazine recently sat down with Founder Dave Anderson and Senior Director of Strategy and Franchise Operations Al Hank, to discuss the brand’s plans for the coming year.

Famous Dave’s classic tenants have remained consistent throughout the brand’s 25-year evolution, something fundamental in its success. These include “perseverance [and] obsessive devotion to making people happy,” in the words of Dave Anderson. Both of these qualities are causal in the brand’s innovative mindset and experimentation with new concepts. Coherently, it has stayed true to the timeless barbecue recipes that have helped it to rise to domination of the barbecue industry. “Famous Dave’s has more SKUs in retail stores than any other restaurant company, and that is a testament to the quality of the recipes we have created,” remarks Dave. By being able to flirt with new ideas while reinforcing its core fundamentals, the brand has primed itself for success within the coming decade.

Innovation is something that Famous Dave’s has excelled at and being able to understand its consumer base has been crucial. As 2020 begins, nearly 50 percent of the award-winning franchise’s business is off-site, in the form of catering or mobile orders. To accommodate this, Famous Dave’s has introduced a new, smaller-footprint restaurant design. It intends to support its customer base while giving dine-in customers a more social, lively atmosphere. Furthermore, the franchise will open four of its first drive-thru locations this year, making it more convenient for customers to get their food. As Senior Director of Strategy and Franchise Operations, Al Hank says, “We’re focusing on evolving our brand to appeal to a younger demographic as well as to focus on our off-premise business.”

Incorporating tech into its restaurants is also an essential part of the brand’s renovations moving forward. Previously, Famous Dave’s had focused on implementing a POS system, designed at helping its employees take orders more efficiently. Now it is more focused on helping the customer place an order more efficiently. “Our smaller footprint restaurant concepts will feature technological innovations including tabletop ordering and kiosks for convenience,” says Al Hank. These improvements will not just make it easier for customers to order their food, but will free-up employees to provide the customer with an improved dining experience.

Concurrently, Founder Dave Anderson is focused on ramping up the social media aspect of the brand. “You’re trying to give your customers Instagram-worthy meals because they’re in charge of your advertising,” he says. “Today, your customers are your advertising agency on social media.” Social media presence is something that many franchises struggle with during this day and age, having to think outside the box to come up with solutions. Famous Dave’s barbecue speaks for itself however, as Dave and his brand have built up a tremendous reputation over the past 25 years. With over 400,000 followers on Facebook and 12,400 on Instagram, the sky is the limit for the award-winning franchise.

When Dave Anderson founded Famous Dave’s just over 25 years ago, he never foresaw himself creating a barbecue empire. He simply wanted to share his love for barbecue with those around him. But his barbecue recipe was too good to be stopped. As the lines continued to grow at his restaurants, Dave knew that expansion was inevitable. While the award-winning franchise has grown to 130 locations across 33 states and three countries, Dave’s vision remains the same: Sharing the joy of barbecue with the people. He continues to make it more accessible to the masses, whether it be through his simple restaurant concept, emphasis on technology and social media, or his straight forward franchising model. Today, Dave is focused on passing his vision on to his Franchise Owners, who share his same passions. In his own words, “I’ve always wanted folks to see me as the guy next door who is a role model for the American Dream come true and a living example of entrepreneurship.”

Owning a Famous Dave’s is more than just another business venture. It’s a way to achieve the perfect work/life balance while having the potential for tremendous profits. To make your American Dream come true, visit our franchising site here.